Developed as a Trials car 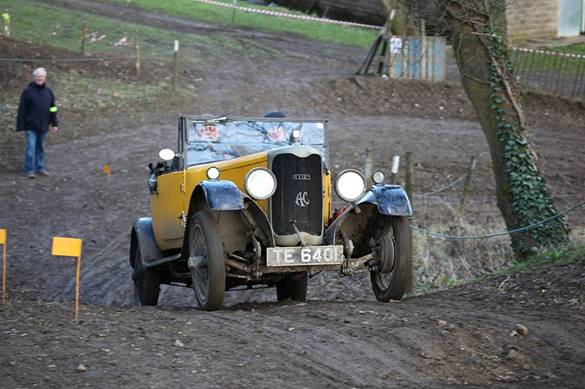 I have been asked many times to describe my under-drive, so here goes. 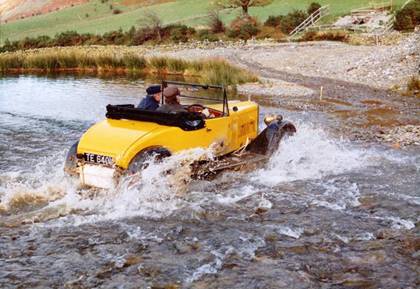 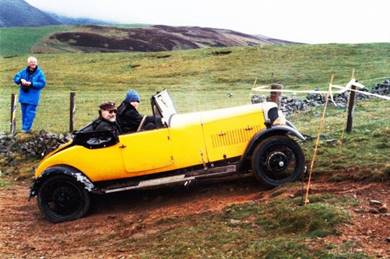 This is one of the last Vintage ACs to be built and so was built by “AC (Acedes) Ltd” in 1929. However, I am not sure from the catalogues which model it was described as when originally for sale, “Aceca” or “SF Edge Special”. The engine is the long-lived (1919-1962) AC 2-litre 6-cylinder hemispherical head, “cats paw” with the water pump driven directly by the front end of the single overhead cam shaft, but fitted with triple SU carburettors and electric fuel pump. The chassis has one of the last, and I believe up-rated, AC 3-speed transaxle gearboxes and the excellent Rubbery Owen front wheel brakes. The body has the high bonnet line and a dickey seat, split windscreen with single electric wiper, one-handed hood and wind-up windows; so it goes from open car to fully weatherproof in less than one minute without leaving your seat. All of this is standard AC supply, but the engine has been fully rebuilt with new pistons, is water tight and has good, even cylinder compressions. The back axle has had a new worm and wheel, the brakes have been relined, re-bushed and balanced, and all suspension and steering joints have been re-bushed as necessary. The bull-nose radiator has been re-cored within its German silver header and footer tanks.

I bought this car in 1989 and restored it to be my Trials car. After several years of regular Trialling, I was forced to admit that it was just not competitive enough for me because of the three speed gearbox, which did not have a low enough bottom gear. So although I had made some useful changes to produce more power I could not keep the revs up enough on Trial hills to use that power. Back to the drawing board; I had it definitely from the Trials Committee of the VSCC in 1994 that I could change the drive ratio in any way I chose, provided I used contemporaneous technology and materials, kept the original gearbox and back axle, retained reverse gear unaltered, and did not use more forwards speeds than the car had originally; that left me some scope, I felt.

I have made some useful modifications which have all been done in such a way that they can be removed and/or replaced by the original components which are still with the car.

1)               The Autovac fuel supply and up-draught single carburettor have been replaced by an early electric fuel pump and a set of post-war AC triple SUs. SF Edge was fitting some of these before the war and so they could have been chosen as original equipment.

2)               The fuel tank has been replaced by a shallower-but-longer, bespoke stainless steel tank of the same capacity for ground clearance reasons. The original tank is fuel-tight and has its original cork float level gauge.

3)               The original small-diameter prop shaft that ran between the clutch and the spherical bearing at the front of the transaxle has been replaced by my unique design of chain reduction gear. 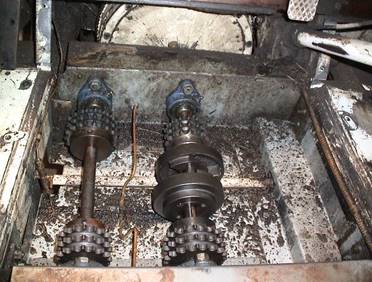 This needs to be seen to be really understood, but has been approved by the VSCC in 1994 for use in Club Trials in the Modified Class. It consists of two removable, Z-section, transverse cross bearers fitted between the chassis tubes behind the clutch and in front of the torque tube. These carry centrally back-to-back, self-aligning bearings that carry two stub prop shafts. These two stubs are coupled together in line by a rubber drive star when no reduction is wanted, e.g. when

driving the car from home to a Trial. To give the reduction, the two stubs are disconnected by removing the star, and triplex Renolds chains are fitted at each end of the layshaft to the left and around the stubs. It takes about 25 minutes of work to reconnect when arriving at the Trial area, and is then left connected until the Trial has been completed. Chain lubrication is applied manual as needed by an adapted Pyrene fire-extinguisher and it has all proved totally reliable over many years of use.

4)               I have made and fitted a thermostatically switched, electric cooling fan; no fan was supplied or needed for on-road use.

5)               I have had an additional spare wheel made, so the car now carries two spares that are fitted with tyres that are only used during Trials, thus preserving their clear-cut tread pattern for as long as possible.

6)               I removed the original, wooden running boards which were rotten and replaced them with new wood, but I did not refit the downward-protruding, steel step-wells, also for ground clearance reasons, but I do have a replacement pair available.

7)               I have replaced all suspect ash framing to avoid undue flexing, but all body panels and most of the leather work are original. 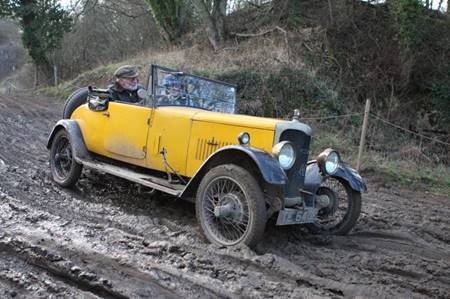 I used the car for many VSCC trials in the last century and several in the first decade of this, developing it along the way. I have never had a trailer and have always enjoyed the solitary drive to and from the Trials in this delightful car almost as much as I did the Trial itself, for which I was joined by friends or family travelling by other means. Towards the end of its development it became capable of achieving an occasional Third Class Award, and even a Second Class in the Scottish Trial; that totally satisfied my mildly competitive streak. Its appearance is scruffy but sound, brush painted in Post Office Engineers Yellow with black wings. Perhaps because it does not look like any of the other cars that get used in VSCC Trials, it has had more than its fair share of photographs in the VSCC Bulletin, The Automobile etc, even appearing on the front cover on occasion. In the last century Drumhouse was a significant and very difficult hill on the Lakeland Trial (now much improved for quarry working and therefore much spoilt for Trialling); it was so difficult that they used to issue Certificates to those who cleared it, regardless of their result in the Trial. This is the only Vintage AC ever to have cleared Drumhouse as it was in 1995 and I have Certificates for 1995, 1997 and 1998; I can’t remember what went wrong in 1996, probably driver error; but this sounds a little less noteworthy when you realise that it is probably the only Vintage AC ever to have been entered for this Trial; in the 20th Century David Hescroff was very successful in Trials with his AC but that was a PVT and was totally different in every single feature of mechanics, style, and appearance; yes, I do like semi-colons.

As well as the original parts that I have removed and preserved, and small spares I have picked up over the years, I have acquired a spare Vintage crankshaft that appears sound and I obtained a length of the correct grade of centrifugally cast thick-wall steel tube for cylinder liners. I got my retired Technician from University times to turn and mill this into a set of 6 liners but I have never found the need to fit them.

Both the engineering and the trialling have given me so much pleasure; but perhaps it is now time to revert to more conventional use of this charming, speedy and eminently useable car.